[Father John] humbly offers his words of counsel to us, not as an emotionally and spiritually distant pedagogue, but as a fellow climber." - from the forward by Bishop BASIL

This book sis written to help those in a non-monastic setting understand how to apply The Ladder of Divine Ascent to their lives. Each chapter contains many direct quotes from Saint Jon's writigns, in addition to commentary on Saint Jonh's words. This book, therefore, should be used as a primer to the Ladder as a helpful tool for ascending the spiritual heights. - from the back cover 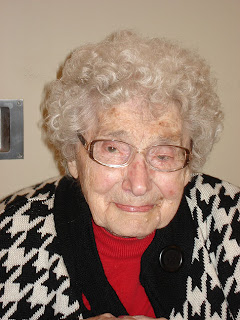 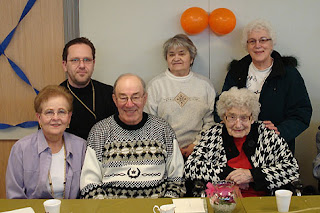 
The following is the story of Mrs. Victoria Malesh, written by her daughter, Mrs. Eileen Hepworth, in the year 2003.


Victoria Malesh was born on February 14, 1907, in the village of Kleit, Bucovina, Austria. She was the eldest of 11 children, born of Theodore (Tom) and Elizabeth (Rosputnek) Daneluik.

They immigrated to Canada in 1909 when she was two years old. They went to Pilot Butte, Saskatchewan to live with her mother's sister, Mrs. Surdia. That same year they moved to Limerick, whereher father settled on their homestead at NE 19-7-23-3, situated five miles of Limerick.

Victoria attended Milton School. During her schooldays she often helped out at the home of the Oncescu family. In June 1991,she had the privilege of attending the Milton School Reunion, where she receiveda plaque for being the oldest student to attend, at the age of 84.

Victoria married Mike Malesh on June 3, 1923 when she was 16 years old. They were married at Saints Peter and Paul Greek Orthodox Church in Flintoft, SK. They continued to attend this church for the years that they remained on the farm. This is where all their children were baptised. They took up residence on the farm a mile west of Stonehenge, on SE 1-7-2-3. Mike built a two-room shack, which had only the barest of necessities: a stove, a bed,table and chairs and small cupboard. They farmed with horses all through the depression years, both of them working hard with no conveniences as we know them today; as well having a baby every two years until they reached their family of ten. In January 1942, Mike passed away suddenly, leaving Victoria a widow at the age of 35. She remained on the farm with the assistance of her oldest son, Dan. Times improved somewhat and they were able to buy machinery, but the horses were still part of the farm. Some of the family still love their horses.

In April of 1956, she moved to Moose Jaw, where she was employed at the Providence Hospital as a cook's assistant. It was more hard work and long hours, especially early morning hours and not having a vehicle. She walked several blocks, rain or shine, and many mornings the police, while on patrol, would give her and a co-worker a ride to the hospital. She enjoyed her time in Moose Jaw until her retirement in 1972, at the age of 65. She enjoyed her retirement years taking up residence in a senior complex, and was finally persuaded to do some travelling to the family members in Vancouver, Eastern Canada and even visited her daughter, Laura, in California.

In May 1996, she had the misfortune of breaking her hip. She recovered somewhat but needed extra care, so much against her wishes, she had to leave Moose Jaw and move to the Pioneer Lodge in Assiniboia. She is presently a resident of the Ross Payant Nursing Home in Assiniboia.

In July of 2000, a family reunion was held in Jean Louis Legaare Park at Willow Bunch. Over 75 family members were able to attend. At theage of 96, in the year of 2003, she is in fairly good health; she is very aware of her surroundings, especially the staff att the nursing home, and all the family and friends who keep in touch. She is well informed of day-to-day events with radio, television, papers such as the Moose Jaw Times Herald, and the Assiniboia Times, as well as her phone.


The following is the family story of Mr. Mike Malesh and his wife Victoria, written by Terry Malesh.


Mike Malesh was born in Bucovina, Austria and came to Canada in 1911. He worked on the Parliament Buildings in Regina and then on a farm at Pilot Bute. He applied for a homestead on May 22, 1911 at Saint Walburg, SK.

In 1914, he moved to the Stonehenge District, where he resided until his death in 1942. He bought the SE 1-7-2-3- and built a two-room shack. For breaking the soil, he used three oxen, a horse and a sulky plough. He later bought another quarter of land, and sold the oxen and purchased six horses, with which he farmed for many years.

The only furniture Mike had at the time of his marriage was a coal and wood stove, a small steel frame bed, a set of cupboards, and a table and chairs. The shack was not insulated and was freezing cold in the winter.

Seeding was done by hand the first few years that Mike farmed. Later, a small seed drill was purchased. This was used for several years. Summer fallow was done by horse-drawn ploughs. This was a slow and tedious job.

Harvest time was a very busy period. In the early years crops were cut with a binder and then stooked. Usually the whole family helped with stooking. After this came threshing time with big crews of hungry men to feed. The threshing machines were driven by steel-wheeled tractors. Stook were loaded into horse drawn racks and forked into the threshing machine. The grain was shovelled by hand.

The depression hit the family very hard; feed for the livestock was difficult to find and water was also a problem. Crops were seeded every year but barely enough for seed was harvested. In 1937 there was not enough grain harvested, so relief seed was brought in along with food, which consisted of dried fish, cheese, apples, and potatoes. Relief hey was brought into Stonehenge by rail, which was built in 1927. The tried to plant a garden every year, but very little grew. There was no way to irrigate and the blazing sun, and hot winds would parch everything. Russian thistle was stacked for feed in 1937. Also in 1937 a cow was sold for several dollars. This money was used to but coal from Paul Tarita's mine. A bull was sold for forty dollars and this money was used to buy the winter's supply of groceries. There was a grasshopper plague in 1937 also. In 1938 the crops were ruined by rust.

For entertainment the family played ball. Bats were made from fence posts. The children had a ball but no gloves. The girls went on to play ball in Assiniboia, and later Regina and Laura went to play professional softball in California.

Other Orthodox Churches in the area